Book: Ishmael – An Adventure of the Mind and Spirit 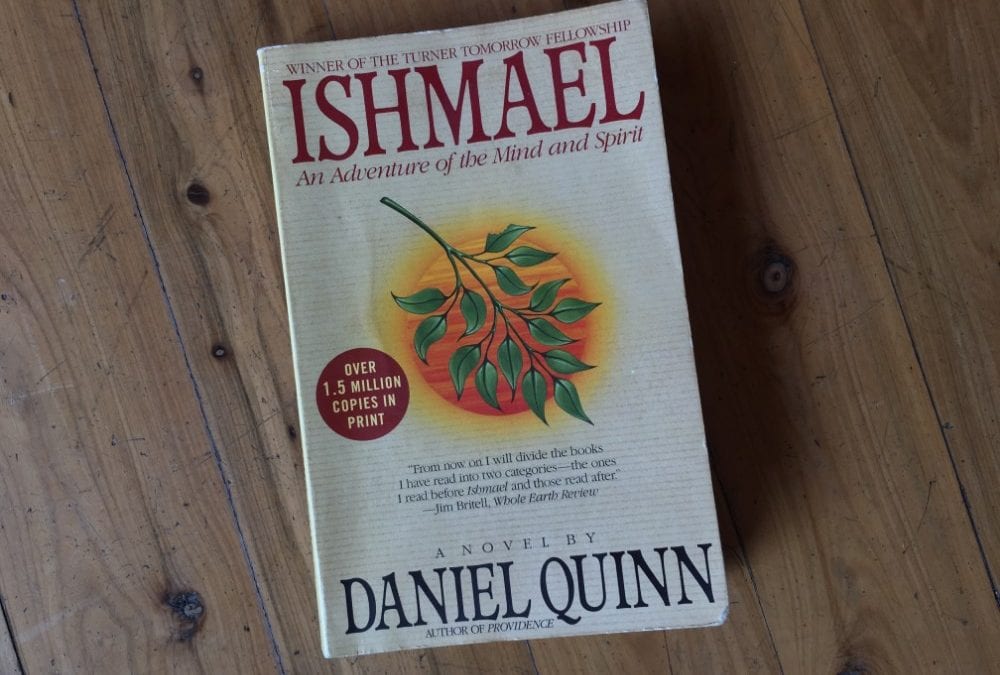 The thing I love about Ishmael is that it is written as a novel which means it is so easy to read! Too often I buy books that are full of wisdom but I struggle to sit down and actually read them. But not Ishmael.

Daniel Quinn finally got this book published in 1992 after winning the Turner Tomorrow Award for a book with creative and positive solutions to global problems. The book follows a gorilla named Ishmael who is trying to teach his newest student about the story that we have told ourselves as to how mankind came into existence and our role in this world.

Quinn challenges our creation story of evolution ending with humans and the idea that follows: the role of humans is to conquer the world. This fascinating story will take you backwards and forwards through time to highlight some big global issues that you may never have even considered before.

It is amazing to think that even 25 years ago when this book was published, Quinn could foresee that the way that we were living was detrimental to the earth and if left unchecked, we were going to breed ourselves into extinction. But it isn’t all doom and gloom, he also provides us with wisdom and solutions as to how we can solve some big global problems.

“I have amazing news for you. Man is not alone on this planet. He is part of a community, upon which he depends absolutely.”

“What is crucial to your survival as a race is not the redistribution of power and wealth within the prison but rather the destruction of the prison itself.”

“Famine isn’t unique to humans. All species are subject to it everywhere in the world. When the population of any species outstrips its food resources, that population declines until it’s once again in balance with its resources. Mother Culture says that humans should be exempt from that process, so when she finds a population that has outstripped its resources, she rushes in food from the outside, thus making it a certainty that there will be even more of them to starve in the next generation. Because the population is never allowed to decline to the point at which it can be supported by its own resources, famine becomes a chronic feature of their lives.”

“What man built up, the wind and rain tore down. The fields he cleared for his crops and his villages, the jungle fought to reclaim. The seeds he sowed, the birds snatched away. The shoots he nurtured, the insects nibbled. The harvest he stored, the mice plundered. The animals he bred and fed the wolves and foxes stole away. The mountains, the rivers, and the oceans stood in their places and would not make way for him. The earthquake, the flood, the hurricane, the blizzard, and the drought would not disappear at his command.”

## We are currently closed due to the Greater Sydney lockdown. Please email us with any reschedule requests.##CLICK HERE TO EMAIL